The only thing that actually sets this back in my opinion however is the body. It does have a slick design, but Sony has not yet come out with a body that is water resistant or that can handle weather. So when I asked them about the chances of coming out with one, their response was they don't see anything anytime soon. With all this power and technology, i would like to think that for a field camera, they would have some sort of seals that would prevent moisture. It is a field camera afterall. So if you do want that extra protection, you should probably check out a third-party resource that makes protective gear. It might actually be your best option. Since more can sometimes be less, Sony should probably stick to what they are good at, which is making good quality cameras, and let those who make protective gear do what they do best, and gaurantee your product with a raincoat of some sort.

From cameras, to tripods, video cameras, cleaners, websites, marketing tools, and training, the PhotoPlus Expo has it all! Today was packed and powered with the most innovative and newest devices on the market, packed with the functionality to make even the most amateur how the power of heaven on Earth. 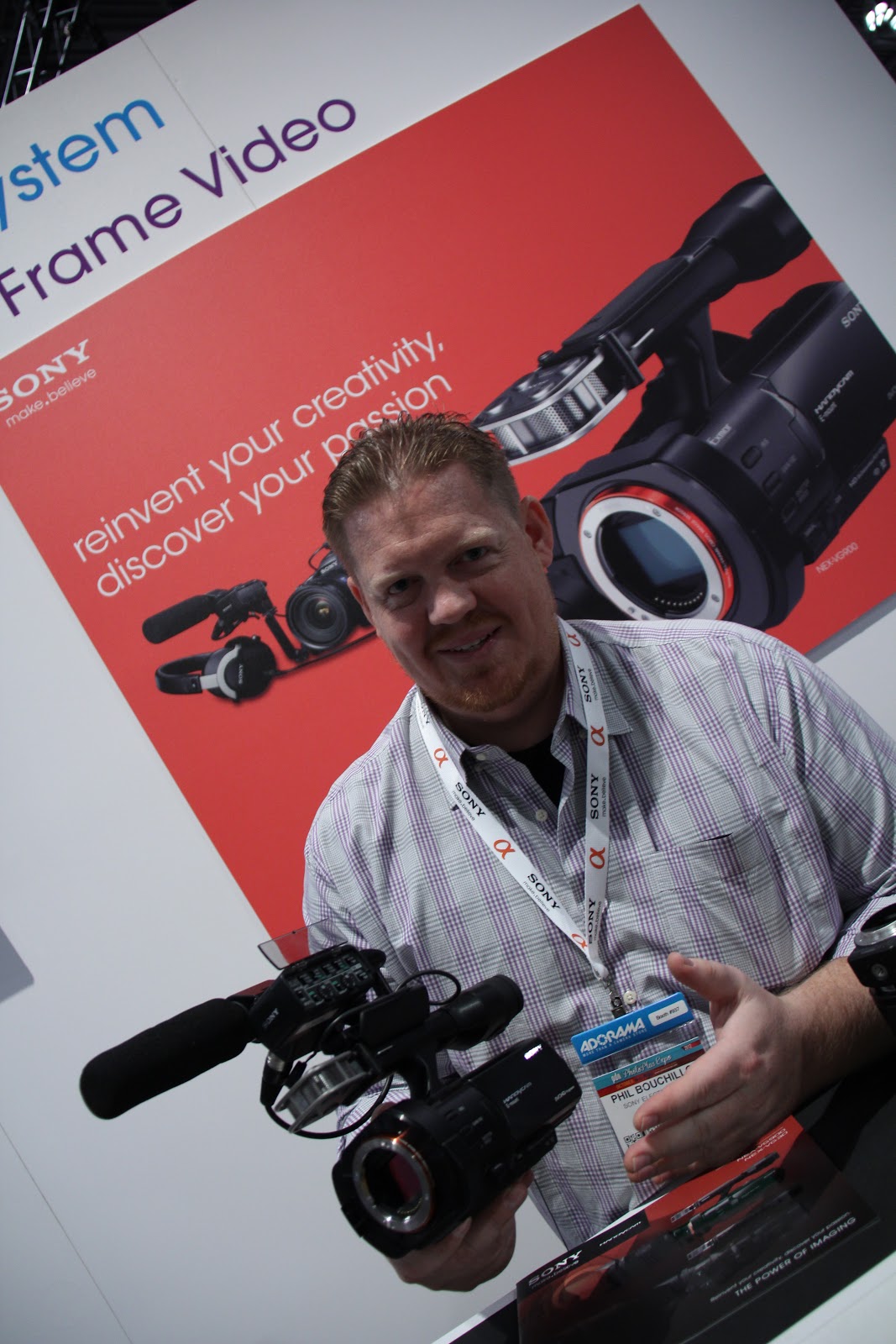 First off, Sony is definitely not someone to mess with. Their newest innovations and technology with engineers have brought forth two cameras that will change the way people think about Sony. Starting with the Sony VG-30 Handycam,

Sony has now started selling the new Sony VG-30 HandyCam. Its quoted by Phil Bouchillon, Sr. Product Manager at Sony Headquarters in San Diego, California, to be one of the best leading "pro-sumer" products on the market. Phil has been with the company now for six years, and is present to demo the VG-30 this year. It's a light, easy to use camera with all the power of your high-end cameras with less worry because of the automatic functions built right in.

So what are some of the benefits to the VG-30? Well, from a full fledged 16.1 megapixel Exmor® APS CMOS sensor to give an unbelievable depth-of-field, interchangeable lenses, and the incredible audio capturing capability in full Dolby Digital 5.1 Surround Sound with its Quad Capsule Spatial Array Microphone, to extensive manual controls that don't overkill the user with too many buttons, this camera is set to make the beginning consumer feel like a professional.

The feel and handling is also a significant feature when it comes to the end-user and professional use. From the weight to the design, it has what feels like almost ergonomic control. It feels like home in your hands as I would say. And not many cameras have that feature. Its not going to sit there and massage your hand and talk to you, but in another sense, it does seem to have that whisper of care that says, "it's okay, I got this."

When it comes to the resolution, the NEX-VG30 offers HD video in 60p and 30p recording capabilities, giving you amazing true-color film-like cinematic effects with Cinema Tone Gamma™, as well as the incredible Cinema Tone Color™. As far as the effects go, this just ads to the true quality that you can produce right in production, using products from Apple, Sony, or Adobe.

To partner off this already beautiful piece, Sony decided to bless you with the 18-200mm (F3.5-6.3) wide range 11x powered zoom lens with autofocus and Optical SteadyShot™stabilization with Active Mode for your stable, less shaky and stable images. It has a variable rate of focus and zoom in more than 8 steps for impressively fluid movements in your professional zoom effects.


I will be looking around, so stay up-to-date on my blog and I'll fill you in on what facinating and advanced protective wear is offered by some of the manufacturers here at the PhotoPlus Expo 2012, here in New York City, New York.